“Within this river are those tyrants so aptly punished in a boiling blood.” — Virgil

The Phlegethon was the boiling river of blood that comprised the first part of the Seventh Circle of Hell. The centaurs are charged with tormenting souls here by dipping the caged sinners into the boiling river as well as shooting arrows at those who attempted to pull themselves out of the fiery blood. Among those was Nessus who allowed Dante to ride him across the river. The violent souls boiled within the depths of the blood. The souls like Alexander the Great and Attila the Hun are among those trapped here. According to Virgil, the river eventually flowed through the Eighth Circle and collected in the Ninth Circle where it froze to make Lake Cocytus.

Attila's Armor- From the corner of the furnace platform, the right part of the wall is broken and has a damned wall that you can climb down. Instead of heading straight down, go left to follow the wall around to a secret area within the centaur itself.

Silver Judas Coin-Found just below the Attila's Armor relic above, on the platform after the damned climb.

Silver Judas Coin- Found just before Wood of the Suicides, on the cliff to the left after crossing the river via the centaur's cages just before talking with Virgil. 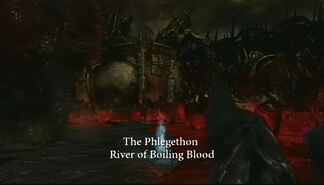 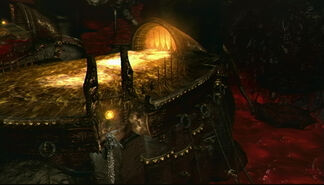 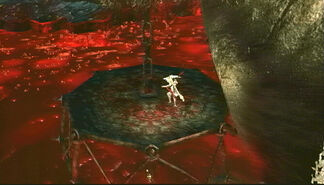 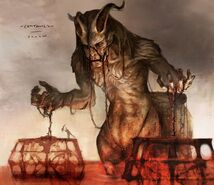 Add a photo to this gallery

Retrieved from "https://dantesinferno.fandom.com/wiki/Phlegethon?oldid=18788"
Community content is available under CC-BY-SA unless otherwise noted.