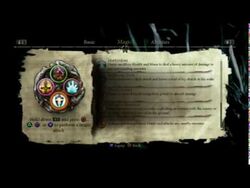 There are a variety of spells to gather throughout the game, each earned by defeating bosses and by purchasing them with souls. Each spell had it's own unique ability whether it was offensive or defensive and was activated by holding down the L1/LB button and pressing one of the four face buttons. Four spells could be equipped at any one time with the player able to assign particular spells to particular buttons, offering quick and easy access to the magic required most. Each spell drained mana.