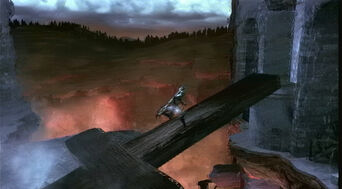 Hell (also known as The Woeful Realm, L'inferno in Italian) is a realm of the afterlife, where unrepentant mortals who committed sin are sent to be tortured as punishment for eternity. Composed of nine circles (or nine levels), the Inferno was strictly Lucifer's domain, devoid of God and His love. Each circle acted as a prison for souls who committed certain types of sins, and they are punished in a poetic manner in death. 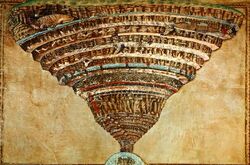 “Into the blind world we must now descend.” — Virgil

The Shores of Acheron are the outermost edges of this realm, beyond the Gates of Hell. The shades that wander its shores lived life with neither fame or infamy, having only ever served themselves rather than choose a side. Denied Paradise, they are not required to enter The Woeful Realm, and are not welcomed in either place.

In the first circle, Limbo, resided the unbaptized and the virtuous pagans who, though not sinful in life, did not accept Christ nor had the opportunity to know about him. Limbo was on the outer boundary of Hell, just across the River Acheron. The guiltless Damned are punished by living in a grand yet deficient form of Heaven; they are treated with honor and are not physically harmed in any way. Lacking a baptism, they lacked the hope for something greater than themselves, despite the strength of their goodness.

At the very edge of Limbo resides King Minos, who judged the Damned and sentenced them to their fates in the remaining eight circles below.

Below Limbo was the second circle, Lust. In this circle, the carnal Damned are punished in an endless tempest of fierce winds, representing the power of Lust to blow one about aimlessly and needlessly. These shades are permitted no rest at all, a physical embodiment of their lusts never giving them rest in life. Within it resided Cleopatra, who ruled over the shades atop The Carnal Tower with her lover, Marc Anthony.

Below Lust was the third circle, Gluttony, where overindulgent souls forever lay in a vile slush produced by unceasing foul, icy rains. The rains and sludge symbolized the cold, empty sensuality of their lives, and the waste that their voraciousness generated. The rest of the terrain resembled digestive organs, in keeping with the aesthetics of the circle. This level was guarded by the three-headed guard dog, Cerberus. Beyond him was the circle proper, as well as the Hall of Gluttons. This frozen, maze-like hall was reserved for those of royalty and high status, who in life indulged in food and drinks to gross excess. In death, they are constantly devoured and excreted by several Gluttons for eternity.

Below Gluttony was the fourth circle, Greed. Those whose attitude toward material goods deviated from the appropriate mean are punished. This included avarice (hoarding valuable possessions and money) and the prodigal (those who squandered such goods). Within the circle, occupants are boiled alive in molten gold below. Here Plutus, the demonic God of Wealth, resided along with Lady Fortune, which impacted the fate of those still alive on Earth.

Below Greed was the fifth circle, Anger. In The River Styx, the wrathful fought each other on the surface, while the sullen sank gurgling beneath the water, withdrawn "into a black sulkiness which could find no joy in God or man or the universe." This swampy, noxious terrain was guarded by its ferryman, Phlegyas, who transported passengers across. Beyond the river is the City of Dis, residence of the Fallen Angels and the gateway to the final four circles of Hell.

Below Anger was the sixth circle, Heresy. In this circle, heretics such as Epicureans (those who believed that "the soul died with the body") are trapped alongside those who denied the existence of God and the soul after death, and those who worshiped false idols and devils. In this burning cemetery, Pagans, the followers of Epicurus, and atheists are burned alive in partially sealed coffins, crypts and tombs for all eternity.

Below Heresy was the seventh circle, Violence. This circle was guarded by the Minotaur (a mechanical statue in the game) and separated into three parts: Violence against others (Murder), Violence against the self (Suicide) and Violence against God (Blasphemy). Those who acted with violence against others are boiled in a burning river of blood, the Phlegethon, guarded by Centaurs who kept those trapped within from escaping. Those who committed suicide or violence against themselves are placed in the Wood of the Suicides, condemned to writhe in eternal pain as gnarled trees. As just penalty for having given up their old bodies, they are denied a human form in death. Finally, those who showed violence against God are placed in the harsh region of the Abominable Sands, including those guilty of sodomy, perversion of Nature and blasphemy against God. They are condemned to wander among burning sand dunes as the flaming brimstone rains down upon them.

Below Violence was the eighth circle, Fraud. Fraud was an extremely dark place that held those guilty of deliberate, knowing evil; those who used lies and deception for personal gain. This circle was divided into ten ditches, known collectively as the Malebolge (singular bolgia, meaning "ditch" or "pit"). Each of the Malebolge holds a different type of liar and a different, appropriately poetic form of punishment.

Below Fraud was the ninth circle, Treachery. This was the farthest place in all of creation from the light of God, located at the Earth's core, and is the deepest and blackest of all of the circles. This was where traitors are distinguished from the "merely" fraudulent; their acts involved betraying family, community, guests and God Himself. Alongside the traitors, the Giants of myth are condemned here, guarding the entrance to the circle proper for their daring to battle against the divine. Due to such an extreme absence of Love among these sinners, there is no warmth, and the circle is depicted as a large, frozen lake holding the traitors captive within the ice. At the very center of Treachery lay Lucifer, trapped in the frozen Lake Cocytus from the waist downwards. The futile beating of his wings causes an icy wind which, combined with the tears that he shed, only trapped him in the ice further, in addition as his fellow traitors.

The following table includes characters who were known to be in Hell at some point during the series. Naturally, it can be assumed that any mortal in the Dante universe could eventually become a resident. Note: Characters with technical matters will appear with a "*" next to their name.

Retrieved from "https://dantesinferno.fandom.com/wiki/Hell?oldid=18731"
Community content is available under CC-BY-SA unless otherwise noted.