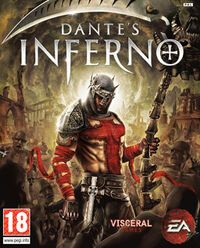 Dante's Inferno was a third person action-adventure game published by Electronic Arts and developed by Visceral Games. It was based on the first cantica of the epic poem, Divine Comedy by Dante Alighieri. The game's story was written by Will Rokos and the head of production was Justin Lambros, assisted by Zach Mumbach. The game was first released in Australia on February 4, 2010, followed by releases in the United Kingdom on February 5 and the United States on February 9. WildStorm Productions, a publishing imprint of DC Comics also released a serialized adaptation of the game in February and an animated film was released alongside the game on February 9.

The game contained light and heavy attacks and the use of magic. The main weapon that Dante would be using throughout the game was a scythe. Dante obtained his scythe by stealing it from Death in the opening sequence of the game. Throughout the game, Dante would be given many different magical powers. For example, before Beatrice died, she gave Dante the Holy Cross. The Holy Cross had a magical ability that fired a burst of holy light that would destroy everything unholy in it's path. Another feature that this game would include was something called Beast Taming. Beast Taming involved Dante gaining the ability to ride huge beasts. Dante gained this ability by killing the huge demons who often rode these beasts. Once Dante tamed a beast and was riding it, he would be given access to different abilities or attacks including fire breathing or simply bashing their enemies. Another feature of the game was that Dante had the ability to condemn or absolve foes and Damned shades. Each condemnation or absolution would result in the gaining of Holy or Unholy points. Holy and Unholy points allowed for your attacks to be increased. The Holy points increased the Holy Cross attack while the Unholy points increased the power of Dante's scythe.

Dante's Inferno generally used the same characters as in the original poem and the only and truly and new character was Beatrice's brother, Francesco Portinari. However, many of them are greatly reinterpreted. For example, Cleopatra was now the guardian demon of the second circle rather than a regular Damned soul. Most importantly, though, Dante was reinterpreted as a veteran of the Third Crusade and Beatrice, despite having only met her twice was depicted as his fiancee'.

Dante was in pursuit of his beloved Beatrice. He boldly tried to free her soul from Lucifer himself who needed the soul of an innocent in order to escape from damnation. Lucifer tried to use the soul of Beatrice to escape from damnation to conquer all of that was righteous. With the Roman poet, Virgil as his guide, Dante's journey took him past many monstrous creatures. Dante must confront his sins along with his family's past and his numerous war crimes in order to save Beatrice.

Dante's Inferno was actually just based off Part One out of Three Parts in Dante Alighieri's poem, The Divine Comedy, hence the end of the game showing the red, cross shaped cloth that was sewed on turning into a snake with Lucifer's laugh being heard as it slithered away. Also, the game depicted the words to be continued just before the end credits.

The three parts of The Divine Comedy are titled: "The Inferno" (Part one), "Purgatorio" (Part two) Purgatory in English and (Part three) "Paradiso", Paradise in English.

Dante Alighieri, the writer of The Divine Comedy was born under the sign of Gemini in Florence in 1265. In 1314, he published "The Inferno", part one of the poem. In 1315, he published part two, titled "Purgatorio". And finally in 1321, part three "Paradiso" was published. Further into the year, Dante died from malaria during his return from a diplomatic mission to Venice in Ravenna on either September 13th or 14th.

Retrieved from "https://dantesinferno.fandom.com/wiki/Dante%27s_Inferno?oldid=18272"
Community content is available under CC-BY-SA unless otherwise noted.