Violence, Wood of the Suicides

Pollyanna McIntosh
“Why do you break me? Have you no pity?”

Bella Abati was Dante Alighieri's mother who committed suicide rather than continue living with his father. She was encountered in the circle of Violence within the Wood of the Suicides.

Unlike his father, Dante's mother was kind and pious. However, the constant abuse that was heaped upon her and Dante by Alighiero drove her to despair because she lacked the courage and strength to stand up to him. She eventually hung herself.

As a suicide, she was condemned to the Wood of the Suicides where she became a tree-made figure that was hanging from a wooden noose. Her will was joined with the trees that are producing the Suicide Fruit and when Dante entered her part of the woods, he was attacked by her tree until he battered it back. Afterward, she revealed to Dante that she killed herself and admonished him to save Beatrice. Bella begged Dante to absolve her and when he did, she granted him the Suicide Fruit magic.

Dante mourning over his mother's grave. 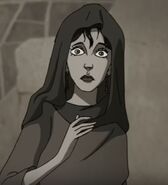