The Asterian Beast is a creature encountered in Dante's Inferno. By initiating a quick-time event that dispatched their demonic riders, Dante was able to ride and control these creatures.

Asterian Beasts are huge, hulking beasts of burden in Hell that are often used by the Beast Tamers. Dante was able to take control of these massive beasts throughout his journey. He first took control of one to break down the Gates of Hell. Asterian Beasts may be slow and heavy, but their massive strength was capable of destroying hordes of minions within seconds. In addition to brute strength, the beasts have the ability to breathe fire and they are also able to perform the Damned Climb. Dante used the brutes to move huge objects and break down anything that stood in his way. After they outlived their usefulness, Dante quickly dispatched them. In the Circle of Greed, they could be seen commanded by the Beast Tamers pushing the piles of gold cubes along rivers of molten gold.

These monsters are a pitch black hybrid of a gorilla and a crocodile with shard like claws, bloodied steel hooves, a white helmet with bull horns and a seat for the rider.

The rider is a yellowish skeleton with smokey grey armour.

Once the command to kill the Tamer appeared, the commands during the mini-game was X, Y, B on the Xbox 360 and Square, Triangle, Circle on the PS3.

When commanding the Asterian Beast:

During the course of the game, Dante took control of five Asterian Beasts (Six if one counted the Gates of Hell Challenge): 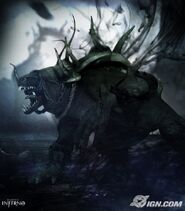 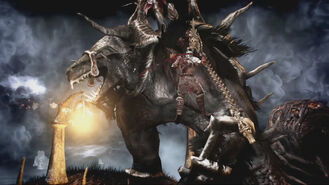 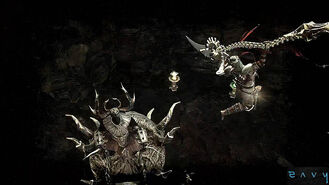 Add a photo to this gallery
Retrieved from "https://dantesinferno.fandom.com/wiki/Asterian_Beast?oldid=17984"
Community content is available under CC-BY-SA unless otherwise noted.