Acre was the first level of Dante's Inferno.

Acre (Akko) was a city in Northern Israel, once under the control of the sultan of Egypt and Syria named Saladin. The Muslim occupation of Saladin in the Holy Land was considered an abomination and a Crusade was launched against him in order to reclaim it in 1189 A.D. Under King Richard I of England, the Crusaders are successful in launching a siege against Acre, capturing the city.

At the start of the game, Dante raced through Acre by killing the prisoners as he went in an attempt to escape from the city. Along the way, a boat crashed into the area where Dante was, allowing him to advance into the Citadel of Acre. Dante was stabbed from behind by an unknown assailant and encountered Death. Dante refused to give in to Death and the two began to battle. This level was completed once the player defeated Death and took his Scythe.

As the game progressed, Dante continued to have flashbacks about his time that was spent at Acre and it was revealed that he was there as a Crusader under King Richard.

Among the Crusaders that are sent with the King are Dante and Francesco (The brother of Dante's fiancee named Beatrice). While they are in Acre, Dante and Francesco watched over the civilians that are being held prisoner under the orders of King Richard. While they are on watch, Dante became increasingly frustrated with his duty and succumbed to temptation when a Slave Girl offered him "Comfort" in exchange for her and her "Brother's" freedom. In doing so, Dante broke the vow of chastity that he made to Beatrice before he left for the Crusades. He freed the Slave Girl and her brother, but Dante's darker tendencies began to worsen as time went by. It was implied that he continued to engage in sex and gluttonous behavior in spite of Francesco's concerns.

As the game began at Acre, it was assumed that the captured prisoners escaped and Dante was forced to kill them. It was revealed that Dante deliberately slaughtered the 3,000 prisoners in cold blood as he was infuriated with guarding them as the negotiations for their release dragged out and regarding all of them as nothing, but soulless heathens. When Richard returned to Acre and discovered the mass murder, he was horrified and demanded to know who killed the prisoners. To protect his future brother-in-law despite the evil that he committed, Francesco offered himself in Dante's place as the culprit, allowing Dante a chance to flee. Francesco was hung for the murders.

After the death of his comrade, Dante used the opportunity to go on the run from Acre by leading back to where he was encountered at the beginning of the game. However, in a modified cutscene when Dante entered Lake Cocytus and fought Lucifer, the fallen angel revealed that the stab wound that Dante received from the assailant was fatal. Dante actually died from the wound at Acre though his unenlightened soul believed that it survived and continued on it's way home to Florence. 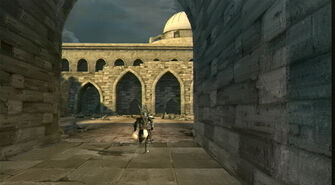 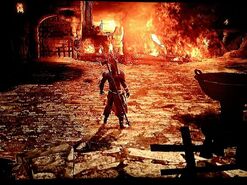 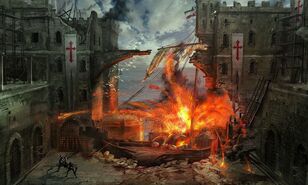 The concept art for the Acre prison.
Community content is available under CC-BY-SA unless otherwise noted.
Advertisement